The "green"eaology of a relationship 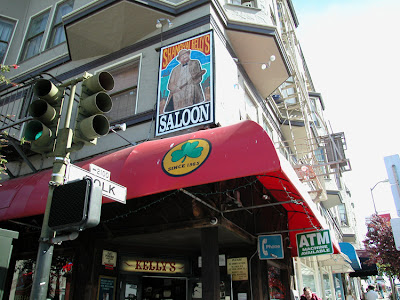 Picture courtesy of this site

One night in bar we traced out the connections between our group of friends. Someone probably still has the cocktail napkin that we used to connect the dots. We realized that for several of us there was a single event from which all of our romantic relationships had sprouted. Our 'big bang'. So to speak. It was the evening of St Patrick's day, 1995. A crowd of likely lads, one of whom was Geekydaddy, just graduated out of various Stanford masters programs and newly resident in San Francisco were out on the town. I will use pseudonyms here to protect identities, so lets call the protagonists "Shane" and "Wendall". Buoyed with the confidence only green beer can give, young Shane caught they eye of a pretty young woman. Lets call her "Julie". Julie was also newly arrived in the city, along with her lovely high school friend "Alice". Shane put the moves on Julie, and Wendall, acting as wing man, swooped in on Alice. Right there in that moment, in a divey bar on Polk St, a social network was born.

Wendall and Alice became a couple, one of those couples who anchor a group of friends together. Alice's internet start up crowd (these were the frothy days of the dot com boom), Julie's fashion  industry crowd and Shane and Wendall's oddball bunch of engineering graduates formed a close circle of friends who whiled away the late 1990's in bars and restaurants, at movies, house parties and in ski cabins. Remember those days? Back when we used disposable film cameras to take pictures of our antics, and only the most sophisticated of us sent them to 'snapfish' to be turned into electronic files to email around? Back when "the real world" on MTV was the only reality show.

Alice and Wendall were the keystone of the group, while everyone else lusted and dated, hooked up and broke up against the backdrop of the San Francisco technology bubble. Can't you just see the photo montage flying past you now? Add a sound track by "Big Head Hootie Matthews and the Traveling Crows" and you will have a perfect picture flashback.

Meanwhile, across town, a young research scientist, lets call her Geekymummy, though she was a long way from being a mummy at this point in time, was also gallivanting about the city from pub to party with her own gang of friends. Her crowd included a young man from the lab next door who we can call "Dennis". Dennis had recently returned from a stint in the peace core in Fiji, where he had met another chap, lets call him "Mick". Mick was California born and bred, and had a high school friend also rather confusingly called Julie, lets make her Julie II, who worked at the very same internet start up that Alice was employed by. This Julie was part of that social network brought into being by the 'St. Patrick's day liason'. I hope you are still following. Maybe I should have scanned a copy of that cocktail napkin.

Julie II had a birthday party in 1998, a large, raucous affair in her Mission district apartment filled with her friends and acquaintances. The network formed by Shane and Julie's hook up and nurtured by Wendall and Alice's relationship were there. The group bound by Dennis and Mick's peace core experience were there too. Two orbits finally collided. Geekydaddy and I met and our history began. We didn't know it, but our trajectories had started moving towards each other on that fateful St Patrick's night. If Shane hadn't hit on Julie in that bar the chances are that Geekydaddy and I would not have both ended up at that party three years later.  Ours is not the only story that began that St. Patrick's night. There are now at least four marriages and seven children who owe their existence to that brief encounter, each with their own unique story.  All from an encounter that happened in a bar who's motto is 'Have a good time tonight! Don’t worry about tomorrow!"

It has been a while since I have partied on St. Patrick's day, but I'm sure somewhere in the city last night another couple hooked up for the first time.  Maybe they will even remember it. Maybe thanks to their encounter, other peoples relationships are already being written, and new children are twinkling on the horizon.