We are well into the school year now. Geekygirl has settled in remarkably. Most days her dad drops her off, and I pick her up from the afterschool program. We have fallen into a new routine, and are moving though our days with calm competence again. Mostly. Our little schoolgirl has become very goal oriented. There seems to be fierce competition amongst the little girls to get across the monkey bars on the playground climbing frame as fast as possible. The advanced kids, I'm told in awed tones, can even skip every other bar. To this end Geekygirl has developed thick callouses on her palms, and assures me that she is one of the best at the bars. I'm glad all those gymnastics classes were good for something!

Our school places a lot of emphasis on reading and writing in the early years. As a school that is struggling with test scores still, they need to focus on the basics. Every morning they have a 'writers workshop' and these efforts, a picture described in the child's own words, are put together to make a book. Geekygirl is an academically inclined child, she loves to read and write and will spend hours with markers, paper and stapler making her own little books even at home. I noticed an additional callous today building on her index finger, from holding her pencil so often.

The first of these books came home not so long ago. I was proud of Geekygirls careful and descriptive illustrations, and glad to see how happy the representations of us family members looked in her pictures. Then I looked more carefully. On three of the five pages mummy looks particularly cheerful, and on each she has a large glass of wine in front of her, as exemplified below! 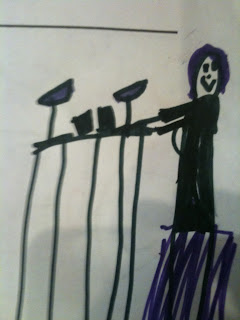 This started me wondering about all the details of our lives that the kids teachers become privy to.  I can understand why therapists use art to find out what is going on in a child's mind. An observant kid like geekygirl puts so much detail into her drawings, and they give away all sorts of clues about our lives.

This past weekend we had a fundraiser for our school. I'm one of those "personality types" that gets seduced by an idea without thinking about the actual effort involved in pulling it off, which is why I and a couple of other parents ended up running a street carnival aided almost exclusively by some of the fifth grade kids.

Our school is undergoing a demographic shift; the younger grades are a mixture of "people like us" and poorer families, but the fifth grade is comprised exclusively of kids from the nearby housing project (council housing to folk in the UK, if it is even still called that). After the event finished, three of my helper team asked me to walk them home. Laden with pumpkins and other goodies that we gave them in thanks for helping, I walked the short few blocks with them enjoying their self satisfied happiness from a day of being both helpful and rewarded.

There is a dividing line in our neighbourhood that most of us don't cross. Charming tidy houses and clean tree lined streets streets abrubtly give way to rough grassland scattered with broken glass and ugly concrete barracks. The only thing we share is the million dollar view of sky and bay. As we crossed that line, my helpers called out to another kid, perched like a meercat on top of the hillside, "is it OK to go home?". He said that it was, so we continued down into the development, between  washing lines and empty fast food bags, between cheery hellos from young mothers and scowls from sterotypical gangsters.

They pushed open a battered door, beckoning to me "Can you acks her if we can come back with you?" I had promised them earlier that I would take them back up to the street fair once we had dropped their loot at home. The tiny house had nothing. Bare kitchen counters, bare walls, bare lineoleum floors.  A single couch in front of a huge flat screen TV, blinds drawn against the sun and the view. A young woman sleeping on the couch with three young kids bouncing all over her, the kids happy to see their sisters and a visiting stranger. I asked her if the girls could come back with me, and she raised her head an inch, asked them not to be too long, then lay back down. My kids offered me a soda, and we headed back out together. I wondered, after seeing their home environment, what kinds of pictures they drew in school.

I  hoped that by going to our local public school we would get a chance to help the kind of people that I don't usually meet. America, perhaps more than Europe, becomes very socioeconomically segregated as we move through life. I know people with all sorts of origins and ethnicity but almost all of them went to college and most to graduate school. I don't think I know anyone who grew up in a housing project. There are two Americas, and one of them is not a place where you would want to be. Here in San Francisco they are right on top of each other, and one of the only places they do meet is in our public schools. I'm glad I took those girls home, but I'm discomforted by the stark contrast between their lives and ours, and fear that the gulf is to wide to be bridged. How do we, as a society, get bright kids like these out of there?

I'm not really asking you for answers, just sharing my thoughts, but if you have any, please do leave a comment.