We are on holiday. You would think that would give me the luxury of lots of time to post, but contrarily the whirl of events and family catch ups combined with disoriented children and the fact that I can't seem to stop logging on to work have left me blogless.

We are having a lovely holiday. Just not finding a lot of down time. The trip is almost over and I have only read one of the nine books I optimistically loaded onto the kindle.

I have many blog posts forming in my head, including how I learned that I would rather take a transatlantic flight with a chimpanzee or a baby goat than with a three year old boy.

The trauma of the long flight is fading, though the return journey looms closer. We are currently in Denmark, a very green, quiet and deliciously relaxing place. If only someone would tell the children that.

Normal blog posting will resume when I return to real life and ironically will have more free time! 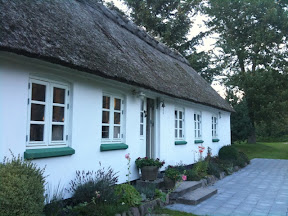 - Posted using BlogPress from my iPhone. 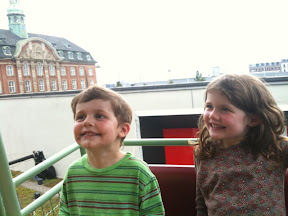 One of the challenges of having two full time working parents is finding time for all of the enriching activites that kids seem to require these days. One might argue that children don't really need to learn kung fu, ballet, softball, Chinese calligraphy, flower arranging and soccer at the age of five, but as we all know, this is the norm these days. In fact even when I was a kid my parents signed us up for lots of extra curricular classes. I took ballet, modern dance, brownies (girl scouts for american readers), flute, piano, band, swimming (stroke classes and synchronized) and horseriding as a kid and I enjoyed it all very much. I would like to offer the same to our kids, but most of these classes are in the early afternoon, not conducive to working parents schedule. Preschool offers music class, soccer and zumba which helps assuage the guilt a little.  I confess though that I do not know what zumba is. I must be the only mother on the planet who hasn't tried it.

We can manage one activity a week. When geekygirl was small I braved a music class. We toyed with ballet and with swimming on the weekends, but have now settled on gymnastics. This is for purely practical reasons. The gym is 2 minutes from home, and on the route home from preschool, and they have concurrent classes for toddler boys and five year old girls. I leave work early every Thursday and sometimes we even make it to class on time and remember the bag with their gym clothes in.

Both kids love it. I enjoy watching them too. It soothes away the stresses of a work day to sit and watch the kids concentrate on their tumbling and jumping, looking so proud of themselves when they achieve something spectacular, like a swing or a somersault over one of the bars. I have noticed improvements in Geekygirls strength and coordination since she has started the class too.

Geekyboy also seems to have fun with it. He can't, however, pronounce the word 'gymnastics'. He calls it "genetics".

I can't help but wonder what other parents must think of me when he proudly announces that he is going to genetics class. I'm secretly waiting for an over eager mum or dad to ask me where one can sign a three year old up to study advanced biology.

I love to ride my bicycle


When I was a kid a bicycle was my first taste of freedom and independence. All the children who lived in our cu de sac would gather on our bikes and ride around our streets engaged in elaborate games. It took me a while to learn to ride a bike, though. It wasn't until Father Christmas clanked in a couple of brand new shiny bicycles for my sister and I one Christmas eve, the kind that folded up in the middle with a hinge for easy transport, (I guess this was before people invented bike racks?), that I mastered the art of riding without stablizers. I must have been at least 9 years old.

Our San Francisco home, being situated on a hill so steep that it is used for the 'street louge' event when our city hosts the “X games”, is not an ideal place for teaching kids to ride bikes. Our Tahoe place however is perfect. We have a long, smooth wide tamaced driveway ideal for bike practice, the streets are quiet, bikes, pedestrians, dogs and kids have right of way over cars. The community up here feels a like going back in time, to how I imagine America was back in the 1970's. It isn't unusual to see a bunch of dusty children, not much older than 7 or 8, flying around on bicycles, unsupervised except by a galumphing golden retreiver with an American flag bandana around its neck.

I've documented here our struggles helping Geekygirl learn to ski. Our first attempts at teaching her to ride a bike were similarly difficult. I optimistically bought a cheap little bike with stablizers last year but she showed little interest in it. Geekygirl is not a child who can be persuaded to try something difficult if she reslly doesn't want to, so the bike languished in the garage. This summer I was determined to get the kids velocepidal. We splashed out on a decent brand of kid bike with smooth pedalling action.

Shopping for these bikes made me wonder about the 'genderization' of everything. When I was a kid I don't recall bikes being quite so obviously “Girl” and “Boy”. As a parent with a child of each gender I would very much like to be able to pass down these expensive items, but we ended up with a purple bicycle with a basket and pink handlebar streamers for Geekygirl (it is at least decorated with dragonflies rather than princesses, and Geekyboy is quite envious of the streamers) and a black and white motocross style one for Geekyboy.

Geekygirl was thrilled with the bike, but still unsure about riding it, and as usual our efforts at encouragement caused her to become self concious and refuse to try. I decided just to sit out in the driveway, reading and half paying attention to her. I love to watch geekygirl play. She takes off into imaginary worlds, narrating out loud the story that she is participating in. She was on some kind of mission that involved climbing the rocks when I noticed out of the corner of my eye that she was on the bicycle.  "The girl needed to take some cookies to her friends house, so she got on her bicycle and zoomed there" I heard her say. Sure enough she got on, pedalled a few feet then hopped off, parked it and skipped off to the imaginary friends house. She came back, rode a few more laps of the driveway, then hopped off again.

I remembered, watching her, how my own childhood bicycle doubled as a pony, a broomstick, or a magical silver deer. Seeing her incorporate hers into into her games reassured me that she would come to love riding it.

Sure enough, by the end of the weekend she was even confident enough to ride in the 4th of July bicycle parade, an event of such wholesome, sweet all-Americanness that it makes me nostalgic for the American childhood that I didn't even have. 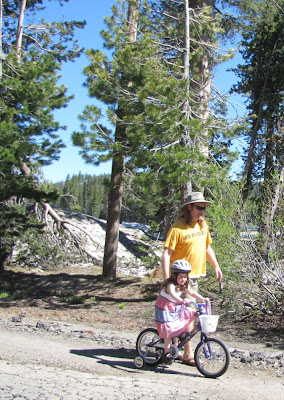 Posted by geekymummy at 9:32 PM

Please pop over and read, and do read all the other wonderful posts that Tasha has gathered together.
Posted by geekymummy at 8:57 PM 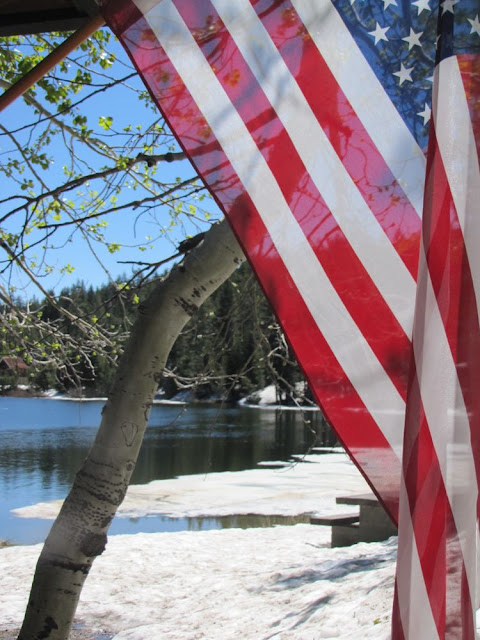 Posted by geekymummy at 1:38 PM

Geekyboy has discovered irony. He must have done, or why else would he have peed on the couch while watching "Potty Power"?

I was warned that potty training little boys could be hard. I had been under the impression that Geekygirl had been quite difficult to train in this respect, and that I was now an expert in these matters, but I now take all my complaints back. If you ever think you know anything about kids, just have another one. This will set you straight and remind you that children are individuals, damn them, and they can't be reared to any kind of formula. When it comes to potty training, Geekyboy has proved to be  recalcitrant.

He can recognize California, Texas, Nevada, Pennsylvania, Maryland and Maine on a map of the USA (he and I are about on par with our recognition of the states. The squareish states in the middle of the union all look the same to me.) He can spell his name and count to twenty. He does still think one and one make eleven, so we have some work to do there, but he is clearly a bright boy.

He doesn't understand his own body though. He can sit on the potty for twenty minutes, and three or four stories (which makes it just about impossible for me to get in to work at 8.00am these days), with nary a trickle produced. Three minutes later we will find him standing in a lake of pee. "Make it come out Mummy" he shouts with frustration while sitting on the loo.

I had an escape from this madness with my annual trip to the American Diabetes Association scientific sessions last week. This year it was in San Diego which is one of my favourite conference locations. A short hop from home, but with much  warmer weather. I broke out my summer dresses and strappy sandals, guzzled cocktails with abandon (not during the conference sessions, I hasten to add) and probably to the bemusement of my co workers I was as giddy as if I was on a tropical vacation. A full time working mum has to get her kicks where she can find them.

This was my first business trip with my newly acquired Kindle. The only downside of traveling with an electronic instead of a paper book is that it has to be turned off during take of and landing, leaving me itching for any kind of reading material. Browsing that catalog of the bizarre that is United Airlines "Sky mall" magazine. I came across this. 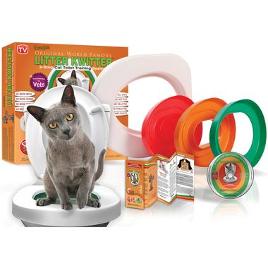 On returning from my trip (I'm not sure who is more delighted to see me when I get back from these trips, the kids, the dog or my husband) a victory had been reached. Geekyboy's patient and ingenious preschool teachers devised a strategy. They sit him on the toilet with his feet in a bowl of warm water, and simultaneously give him a cup of water to drink. A full week of this ritual and he seems to have got the hang of actually peeing on the loo.

He still doesn't seem to recognize when he needs to go, so we need to be vigilant, and as for pooping, lets just say we won't be getting rid of the diaper pail any time soon. Any other potty advice very much welcomed, wise blogosphere (and of course wise family members!)
Posted by geekymummy at 11:58 AM