After reading "Cinderella Ate My Daughter"..

by Peggy Orenstein, I found my thoughts rambling through all sorts of questions about gender and identity. Like a good book should, this one got me thinking. I have a particular interest because it isn't just my daughter that Cinderella has eaten, it is my son too. Geekyboy, pictured here with just his toes showing to protect his identity from posterity, loves to wear dresses and play with fairies. 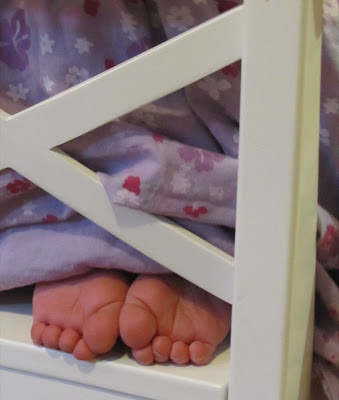 The book is about the "girly girl" mass market culture, and how it grabs hold of our little girls during the preschool years and fills them with the dubious message that being pink and frilly and beautiful is what defines them, leading them into their tween and teen years with the overriding message that being 'hot' is the way to become valued. It is a great read, and I found myself nodding in agreement with many of the authors observations and conclusions. I also found that the book raised a lot of questions.

Why, for instance have we become so comfortable as a society with traditionally 'male' roles and behaviours for women, but not with traditionally female roles and behaviours for men? Indeed even when you look at us left coast feminist types so filled with pride in our girls when they are break gender stereotypes and eschew frills for jeans and dolls for trains, we are much less comfortable when our little boys want to wear dresses and play house with Barbies. Celebrity watching society thinks it is a little odd, but within the realm of normal that superstar preschooler Shiloh Jolie Pitt dresses in lumberjack trousers and truck emblazoned sweaters, but just imagine the furor in the gossip magazines if one of the boys in the family was regularly photographed in a tutu and tights? The same lack of logic applies to toys. Hands up anyone with sons but no daughters who has actually bought their little boy a Disney princess doll, a 'my little pony' or a tiara.  Hands up those of you who have girls but no boys who have nonetheless bought a train set, a toy tool bench or a meccano construction crane?

When considering whether toy preference, and other behaviours like these are hard wired by gender, or shaped by the whims of society Orenstein raises asks "As long as we don't consider the behaviours and interests of one sex as inferior to the other's who cares".

The trouble is that as a society we do consider feminine behaviour to be inferior. When girls play with "boys toys" and dress like little boys we think "future engineer, future doctor, future strong woman who cares more about her work than her appearance, who doesn't get pushed around by men".

When boys wear dresses and play with pink ponies and the cute little hairbrushes that come with them we, and I mean the collective "we", not me personally,  think "future gay aspiring fashion designer destined for tortured life of misunderstanding". We don't think "Future great father and caring husband, future nurse or teacher, poet laureate, director of a charity or tireless advocate for the homeless".  Just take a look at the controversy created by this blog "raising my rainbow" written by a mum raising a  'femininely inclined' little boy, for more examples of our double standards. I hasten to add that I will be delighted and proud if my son becomes a gay fashion designer, by the way. I just don't think that his preference for "littlest pet shop animals' over superheros and monster trucks is an indicator of his future sexual orientation.

Though they are pushed relentlessly onto our daughters, these traits of femininity; the nurturing, the obsession with pinky colours and sparkly textures, the seeking of that "happy ever after" in a relationship, they are at the same time not considered valuable. They are seen as weaknesses, often by women as well as by men. When observed in our male kids that view is only amplified.

I agree with the author in that placing so much emphasis on appearance, allowing beauty to become so irrevocably entwined with self esteem is unhealthy for either sex. That subject deserves a blog post all of its own, as its an issue I find hard to examine dispassionately. You would think that as a Ph.D scientist with a serious intellectual career I would be sanguine about my own looks, but that is not so, I am pathetically shallow about my own appearance and worry about how I will avoid projecting this onto the kids.

Obsession with looks not withstanding, perhaps we should take a step back when we think about gender and our children, and think about changing the roles prescribed by society for both girls and boys. I think the world of the future will need men and women, straight and gay, who have been encouraged to develop both their emotional and their practical sides, who have an eye for beauty, who have developed compassion, and who take pleasure in clothing and cooking as well as trains and building. Adults of both sexes who grew up longing for a life partner to live happily ever after with. The Cinderella dream is one of being swept out of a life of drudgery by nothing more than ones natural charms. It is just a fantasy, and we all need to lapse into fantasy occasionally, even grown up women and men. Maybe the problem isn't that we encourage our little girls to embrace the fallacy of the dreamy life partner swooping in and handing them their "happily ever after", but that we deny this comforting fantasy to our little boys.
Posted by geekymummy at 11:16 AM