This is a post for the weekly photo prompt gallery started by Tara at Sticky Fingers;
This weeks theme is 'colour'. 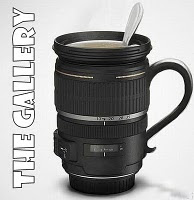 I don't know where the phrase orginated, but here in California when an enormous storm has whirled a couple of feet of fresh snow onto the Sierra Nevada mountains, and then you wake up to that pristine whiteness and blue, blue sky, it is called a "bluebird day".


We woke on Saturday to this vision of blue and white. I took this picture from a cross country ski trail, looking down over the frozen vista of the lodge beside lake Serenity. I like the contrast in scale, the mountains, the cabins, the snow covered pines, and the tiny dots of a family and their dog dragging their sleds across the frozen lake, and a child about to sled down the roof of the little cabin in the foreground 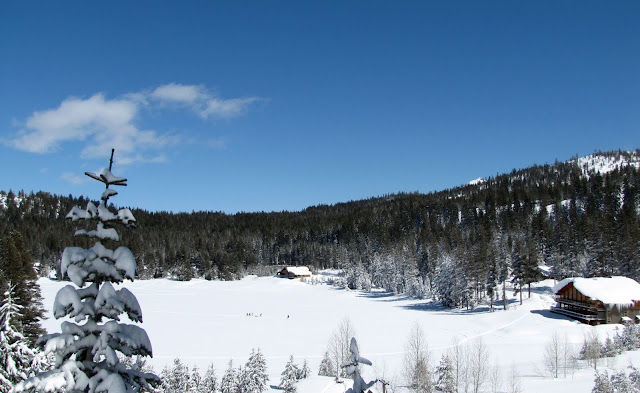 A picture can't really capture the blue of a California mountain sky though. I had never seen a sky like it before I moved here. The word "blue" seems too mundane for something so intense.  I tried "azure, cerulean, and cornflower instead, but even these very lovely words don't quite express what I see. When I look into it I feel that I can see through time out to the boundaries of existance. If I stare hard enough I believe I could absorb some profound information about the physical nature of the universe simply from the colour of the sky.

Before you think I live some kind of idyllic existence with the liberty to ponder at leisure about life, the universe and everything, I should point out that the storm that brought this loveliness played havoc with the driving conditions, and when we arrived our driveway had not been plowed (yes that is how we spell plow in America!), so we had to carry the disoriented kids through three feet of snow into the house, then try to find a spot to park the car where it was at minimal risk of being blindsided by a snowplow. We finally got to bed at 2.30am.

I probably don't need to elaborate upon the effort it took to get two very tired adults, two children and all our gear out of the house the next day to drag our exhaused arses out skiing. You can imagine without me going into detail the tantrums we dealt with as one tired little boy didn't want to sit in his pulk, and an equally exhausted little girl got frustrated with trying to ski but didn't want anyone to help her or even offer sympathy. The beautiful thing about cross country skiing on a bluebird day though is that once you get going you never once think "oh, this was a terrible idea". Sitting in the cabin watching "go diego go" looking longingly out at that blue sky, that would have been a terrible idea.

I took that picture while we ate our sandwiches, and both children slept in their pulks. For those few moments it was just Geekydaddy and I and the marvel of the snowy universe.
Posted by geekymummy at 9:51 PM