The cat who (almost) ruined Christmas.

On December 23rd Geekdaddy and I got home from work nice and early. He was in charge of the Trader Joes grocery bulk run, I was in charge of picking up the expensive sundries at Whole Foods. While the children ran around filled with excitement we packed the car. We have a Subaru Outback wagon, a decent sized vehicle, especially with the added roof pod, but now that we have two kids I finally understand the point of those ginormous "Ford Exxon Valdez Excursion" SUV's. We were headed up to Tahoe for Christmas and New Year, ten full days off work to spend with the family and the animals. We intended to pack our two cats, our dog, the kids and clothing and groceries for the duration into the trusty old wagon. By 8pm we were ready to hit the road, but we were missing one of our feline family members.

Our kitty cats have been with the family longer than I have. They are 12 years old, The orange one is a homebody who has not ventured much beyond our backyard since sustaining a nasty bite on the tail when he was a kitten. His silver brother is a roamer, but usually comes home at 5.30pm on the dot for dinner. However, that evening, as we waited and waited for him, car packed, everything ready to go, he failed to show his furry face. The kids wild excitement turned to misery as we explained to them that they would have to go to bed, as we needed to wait for the cat, but that we would lift them, sleeping, into the car once he was home, and that they would probably still wake up in Tahoe. They did very well with this change of plan, I was expecting tears and wailing.  I was close to tears and wailing myself though as 11.00pm came and went.

We decided to put ourselves to bed too, resigned to the fact that the damn cat was probably not going to return. He has gone for days on end in the past, so we feared that he had decided to take another walkabout. The presents were already in Tahoe, lack of car space meant we had taken Santa's bounty up the previous weekend, so having Christmas at home instead was not an option. But our remaining options; finding someone to take care of the cat at such short notice, if he even came home, or leaving him at large for ten days were both difficult to contemplate. I tossed and turned, unable to sleep.

Then, at 11.45 we heard the jingle of a bell and our roaming kitty leapt in through the window! Thanks goodness we hadn't been able to sleep or we may have missed him. We locked down the house to keep him in, set our alarm for 4.30am, and at that ungodly hour, finally got on the road. This cat is preparing us for the kids teenage years.

We arrived with the whole day of Christmas eve ahead of us, the reprieve from disaster had filled me with energy and I knuckled down, with Geekygirls help, to decorating the tree, making mince pies, preparing the Danish dessert "rice a'lamande" and icing the Christmas cake all with my Christmas playlist blasting unashamedly. ('The Wiggles' do a really good version of Rudolph the red nosed reindeer). The Geekyfamily are still in the process of establishing our own holiday traditions. Geekydaddy grew up with Danish traditions; dinner and gifts on Christmas eve, the piece de resistance of dinner being the rice pudding dessert. I have made this for him every Christmas since we have been together, and this has become an intrinsic part of our Christmas. I confess I far prefer it to the British pud. With our kids  this is about the only Danish thing we have maintained, apart frm the delicate ornaments my mother in law gave me for our tree. We are perpetuating the Father Christmas/Santa Claus myth, this being the first year Geekygirl really got excited about it.

Stockings were hung, the first slice of Christmas cake was left out for Santa, along with a couple of carrots and a glass of wine (Geekgirl's suggestion, we asked her what she though Santa would like to drink, and the smart girl suggested a glass of red!) and the excited kids were herded to bed. Geekygirl was overtired from the early morning, and  anxious about the day to come. I think she was genuinely worried that she hadn't been good enough for Santa (and the point is debatable!), so ended up with three time outs before bedtime for calling Mummy a 'poo poo head'. But sleep finally won, and after the seventieth "I'm not tired" her head at last hit the pillow.

This was the point at which I realized that one critical item had been left behind. Every Saturday when we shop at Trader Joes, Geekygirl had been reminding me that Santa should bring her one of the bags of gold foil covered chocolate coins that hang by the till. Geekydaddy had picked some up weeks ago, and hidden them in our kitchen. And there they still were, 150 miles away, in San Francisco.

I was so angry with myself. What kind of mother forgets a much desired item from Santa's list? It isn't as if Geekygirl had even asked for many things, her list read "Chocolate money, Ariel costume, little Aurora doll, and a 'my little pony'". For all I knew, the chocolate money may have been the most important thing from her point of view, though I, considering it more of a sundry stocking filler, had not packed it with the other gifts. Still, I arranged the remembered items, and soon the tree and fireplace were swamped with gifts, from Santa, from relatives, and from Geekydaddy and I (some presents come from mum and dad, the way our family did Christmas presents growing up, causing me to figure out at a precocious age that Father Christmas and Mummy had the same handwriting. Santa used block capitals on Geekygirls gifts to be on the safe side, and used different gift wrap). I toyed with the idea of writing a note from Santa apologizing for the missing money, explaining that he had brought Chocolate buttons instead, thankfully I did have some of these handy, but Geekydaddy smartly vetoed this, figuring that with all the other gifts she wouldn't notice. He was right, thank goodness.

Christmas morning arrived, at about 6.30am, which is basically when we get up anyway with these lark-like little ones. Our bedrooms here in the cabin are loft style, so we peeped down into the living area, and sure enough, Santa had been! "I saw a tiny flash of light last night" Geekygirl informed me "So I think I saw the reindeer"  The frenzy of unwrapping began. Geekyboy picked up on his sisters enthusiasm, though I think she "helped" open most of his presents for him, and for the animals too.

Geekyboy is of the age where I get to choose all his gifts for him, and we decided that he needed one of those wooden train sets, and some Thomas trains. I had intended to get one for Geekygirl at some point (we strive for gender equity in the toy box), but her desire for all things princess kicked in early. Santa did sensibly buy her a train and some carriages though, since he correctly predicted that the train set would be a popular gift with both children. The requested Aurora doll was one of these three inch high plastic dollies that come with changeable clothes. I had picked up one of these (Belle) as a bribe sticker chart present back when she was barely three, without realizing the changeable dresses are made of latex. Now, you may not be aware of the fetish, but there are adult women who dress in exotic latex gowns. I can't look at Belle in her yellow sparkling rubbery gown without thinking of how much my friend Cynthia would love one in adult size, and I find the little rubbery outfits vaguely unsettling.

But, Santa was asked to add to the collection, so I picked up Aurora. I recalled while in the store that Geekyboy is also rather fond of princesses. In fact he was able to correctly identify and name the Jasmine, A'roo-rah, Cinda-ella and Snow White figurines before he could identify his colours. He often brings me Jasmine in her latex pallazzo pants and says to me "Mummy, Jasmine pants off!" and I can't help but giggle.

Geekyboy also has a penchant for Ariel, so with slight hesitation I picked up the little mermaid doll for his stocking. I examined my own prejudices as I stood in line; I thought it was important that I buy trains for my daughter, but felt slightly odd about buying princesses for my son! We progressive parents tend to focus on "de pinkifying" our daughters, worried about the anti feminist message, but perhaps we have it all wrong, maybe we should be pinkifying our sons instead!

We packed a lot into the day, managed a cross country ski since the skies were blue and the snow crisp and fresh, with the kids napping in their sleds. I was very proud of our dinner; chestnut stuffed trout, sprouts with balsamic reduction, and crispy roast potatoes, followed by the Danish dessert. Then we watched one of their gifts, the DVD of Raymond Briggs 'the snowman". Geekygirl was captivated "they are flying over the whole world" she exclaimed. "Big Whale Splash" said Geekyboy. I'm not ashamed to admit that I was bawling like a baby at the end. Not just because the snowman melts, but because the film is so beautiful, and because it reminded me of the UK home.

Christmas always makes me homesick. In the fourteen years I have lived over here I have not once been home for Christmas, despite the fact that the Christmases of my childhood were universally wonderful. My parents still live in the house we grew up in, packed with warm memories, and celebrate every year with my brother and sister and their families, who live much closer than I do. Our Christmas lunch would last for hours, we would sit down at about three in the afternoon, and would still be at the table at 10.00pm, playing "taboo" after rather too many glasses of wine. At some point between courses we would start the round of phone calls. My mum is one of eight, my dad one of four, and everyone had to be called and thanked, the phone passed around the table along with the wine and port. These days I'm the one on the other end of the phone.

The advent of Skype has brough my family closer though, our kids got to chat with their cousins and their grandparents.  Through facebook and twitter I have entered the living rooms and admired the Christmas trees, joyful children's faces, and amusing anecdotes of so many friends, and the distance doesn't seem so great.  Merry Christmas and happy New Year to you all. 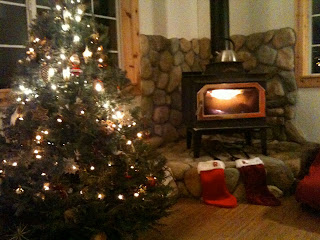 Posted by geekymummy at 9:02 PM

Merry Christmas to the whole Geeky Family. We're working on the family traditions in our house too. Odd how these things become so important, and how hard it is to get them in place. I now realize all of the Williams family traditions were carefully orchestrated by my mom and am beginning to really understand just how amazing she is.

I think you may have started a trend for little bells on collars for my children!!!

bells on collars! I think I should do that for my husband at all times ;)