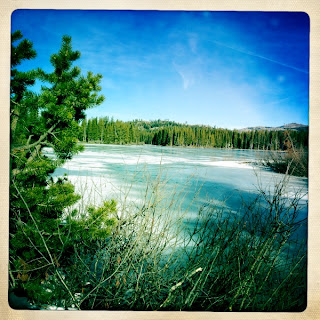 I wasn't sure, this year, if we would get here. To a peaceful Christmas eve in the mountains, with the presents found, bought, delivered, wrapped and waiting to be put under our eclectically decorated tre.

With two cats and a dog and two kids all safely transported across California to the beautiful, though almost snowless mountains.

With gifts from from us to others actually chosen with thought and care, though mainly shipped by amazon,  nestled under other people's trees. Although the photo books I made well advance for shipment to the Grandparents mysteriously disappeared, leaving me digging though ever more bizarre places (my company's dry cleaning closet being the most recent) as I began to believe I had only imagined that I had ever even seen them. They finally appeared last night as we packed the car, in a hidey hole beneath the extra set of back seats. They will not be arriving until the new year.

With a dare I say almost perfect fruit cake sitting proudly on the counter.

The marzipan figures are rather amateur compared to to the creations of some of my facebook friends (seriously, some of you should bake for a living), but the kids are quite happy with my creation, especially the tiny marzipan avatar of the dog gamboling in the snow. 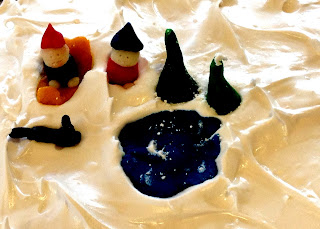 Our tree, however, is a perfect story book fir, a thickly prickly deep green cone. It is decorated with a mixture of gorgeous danish filigree ornaments (thanks to my mother-in-law's excellent Christmas taste), and a hotchpotch of other items; precious preschool offerings, some wooden jungle animals, the mini mirrored disco balls I picked up in the Haight a few years back, my beloved disembodied cat heads, a variety of spangled vehicles and, the new additions, a couple of crocheted octopi from a recent craft fair.

The children love the tree so much. Already they remember the familiar ornaments from years past, unravelling the paper towels I wrapped them in the previous January with delight. Geekygirl is now a very opinionated decorator, and Geekyboy, just shy of four, looks at the tree reverently, and says "it is so beautiful, mummy".

The past few months have been so very busy. A new job for Geekydaddy has meant he is home past eight every might. Real school for Geekygirl is bringing homework, PTA and other obligations. Stressful changes at my work have been occupying my mind and my time.

Halloween hit, and since then I have barely had time to breathe, slamming things into my to do lists and checking them off, hardly gaining satisfaction from completing one task as so many more were waiting, but snatching breaths of pleasure and tiny moments of zen, along with family photos, whenever I could.

It seems that we have made it here, intact, to the end of the year. The last window of the advent calender has been opened (the fact that I remembered to bring it up here a miracle in itself), the rice pudding portion of the Danish "ris alamande" is prepared, waiting to be whipped into a fluffy delicious dessert that is unrivaled by any English pudding. A slice of cake, satisfyingly moist and perfect at that first cut, is waiting for Santa. The children, thrilled to have a seemingly endless eight days free from their regular routines. have made paper chains which are cheering our windows (Thanks Grandma and Grandad) They were so happy and relaxed today that they actually asked to go to bed.

And I have even completed this blog post, which feels in itself like a great big sigh of relief. 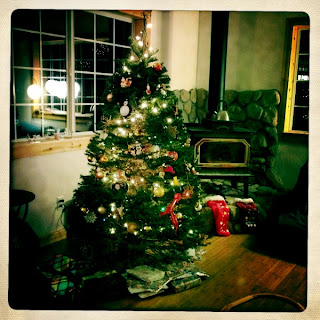 Posted by geekymummy at 9:53 PM