The Year of the Great School Hunt

As the year draws to an end I am hit with the realization that next year we will send our firstborn off to "real school". At the forefront of my mind every waking moment these days is one burning question. Where will we send Geekygirl to Kindergarten next fall?


There are more than seventy elementary schools in San Francisco and anyone can apply to any of them, irrespective of where they live.  Some schools are vastly more popular than others. Predictably, these have a student body that score highly on the state standardized tests, and a PTA that raises several hundred thousands of dollars a year to cushion the impact of budget cuts and pay for class size reduction and enrichment programs. At the other end of the scale there are schools that have been taken over by the state  in order to rectify failing performance on the standardized tests. There are lots of schools that fall in between,  and on the whole schools in the city seem to have been steadily improving over the past five years, from an admittedly rather low starting point. Even so, many San Francisco parents find their liberal sensitivities running up against the realities of the public school system and flee to the highly competitive and horrifically expensive private sector, or flee the city entirely.

Apparently "San Francisco Unified School District is the top performing large urban school district in the state of California and one of the top performing urban districts in the country", which is rather like being, as was an old co-worker of mine, the best 400m runner in the Philippines, but still, it is somewhat reassuring given all the negative messages we get about the state of California's education system.
The student body of San Francisco is very ethnically and economically diverse. Approximately 25% Hispanic, 30% Chinese, 10% African American and 20% white, with the remainder representing people from South East Asia, India, Japan and the South Pacific. In common with many other large urban areas,  we have a high percentage of kids qualify for a free school lunch. The very high scoring schools, of which there are about eight, get hundreds, even a thousand applications for the thirty or forty slots they have for incoming kindergartners. Some schools get almost no applications, the families who live near to the school simply show up when school starts without bothering to apply.
Until this year the San Francisco Unified School district had perhaps one of the most complex admissions procedures ever devised. Families listed seven of the more than seventy elementary schools on their application form, a form that required answering detailed questions about the educational background of the parents, languages spoken at home and whether they were on any form of public assistance, among other things. In the event that a particular school had more applicants than places a complex algorithm called the "Diversity Index", based on the answers to these questions, was applied by computer. Or possibly a bunch of school administrators got drunk and threw darts into the applications. If you want your head to start spinning read a little of the document below. 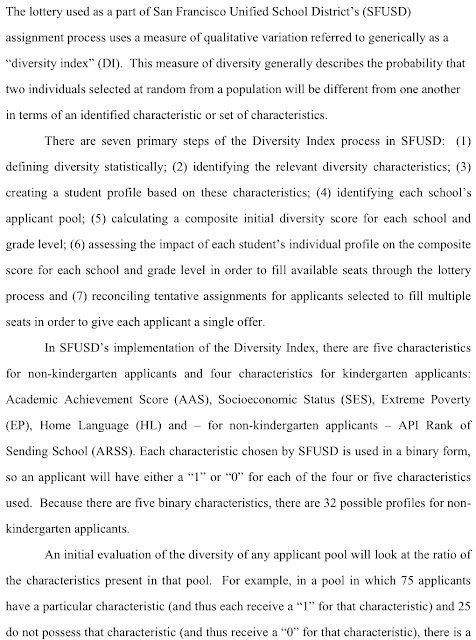 Though well intentioned, the two main problems with the system were that most of the low income people it was intended to help didn't even fill out the forms, and that many middle class people who had a lovely school right beside their house but didn't have a hope of getting into it got very annoyed. To put it bluntly, in any society some people have more choice than others, and many San Francisco families would simply "play the lottery", applying only to two or three of the "top" public schools, then send their children to private school if they were not one of the lucky "winners".

An unintended result of the system was that schools became separated from the communities they were located within. Middle class families left the city in droves and since families with the option to choose private school or to move away simply refused to attend the schools they were assigned to by the diversity algorithm, the schools still remained polarized between the high achieving middle class dominated and the low achieving low income dominated. It worked only in one direction. Motivated poor families could get their kids into high performing schools, but the system couldn't force other people to accept an assignment to a poor performing school.

Recently, though, the tide has started to change. Groups of parents banded together and decided to send their kids to their nearby yet under performing schools, with remarkable results. These parents were motivated by research that suggests that children of engaged and educated parents do well in any school setting, and that the "API' score, the California standardized test, tells one more about the socio-economic make up of the student body than the quality of the teaching.  Indeed when I plotted API against % of kids on a  free school lunch for the schools we are looking at I noticed a near perfect correlation between these two sets of data. 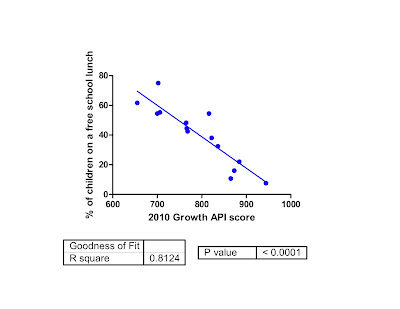 Without any change in teaching strategy, or in the teaching staff, the test scores of these schools started to rise along with the increase in the percentage of middle class kids, and the culture of parental involvement with schooling that they brought with them. Some schools became victims of their own success, they become so popular that they too became increasingly difficult to get into. These success stories have inspired more and more grassroots efforts though, and our schools are getting better for it.

For the class entering in 2011 they have completely revamped the placement system, and given each school an attendance area, but we still have a 'parent choice.' Now we can apply to as many schools as we want, but the tiebreaker is decided without the diversity index algorithm. First prioity will go to siblings of current students, second to families living in areas of the city that had the lowest test scores on last years standardized test, and third to those who live in the schools designated attendance area. Families will be assigned to their attendance area school, or if that is full, to the nearest school with open places, if they do not get into any of the schools they apply for.

Applications are due February 15th.  I have generated a monstrous spreadsheet with information about at least 15 schools in 24 columns. We have toured nine  (eight public/state and one private), my boss becoming ever more incredulous as I take yet another morning off work. By tour nine I fibbed, saying I had a dentist appointment. I probably should have removed the sticker bearing my name and "Grattan School Tour" from my jacket on returning to the office had I expected the lie to fly though.  A group of fellow parents and I have formed a casual collective to share school reviews, discuss options, and more often than not, drink and panic. If it hadn't already been done, I might have started a blog about it!

Is anyone else going into the new year with this level of school related stress, or is this unique to San Franciscans? Remind me again why I love this city......

Posted by geekymummy at 2:39 PM