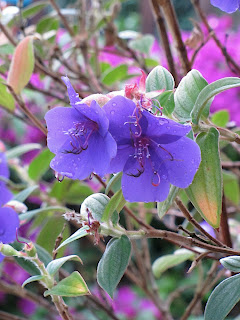 Last weekend I turned forty. I'm sure I'm not the first to observe that time compresses as we get older, but I'm certainly feeling that way on this milestone birthday. Where on earth did the last ten years go? The years from earliest memories through my teens and into my twenties seemed to stretch, long days, slow years. My memories of them still rich and vivid. Perhaps that is why those years are so formative. Maybe time is actually percieved differently through the different ages of our lives.The last ten of mine, though equally as event packed as the rest, seem to have flashed by.

When I was twenty, in the 1990's, the 1970's seemed eons ago, truly a different era. Now in the 2010's, the 1990's seem like just yesterday. I still think of music and movies from that time as 'current'. Children are often completely oblivious to times that they did not experience, kids asking their parents if they had cars or televisions in 'the olden days when you grew up'. My 1980's childhood, with its VCR's, boom boxes, walkmans and BBC basic computers is as much a museum piece now as my fathers childhood during the second world war. Everything folds into the past. Maybe that is why we are driven to have children, to pull us through time.

Forty feels good though. Those short ten years ago, I spent my thirtieth birthday in Hawaii with Geekydaddy, half hoping that he would propose. (He ultimately proposed on my 32nd birthday). We couldn't afford a trip to Hawaii this time, so we brought it to our house instead, with a Hawaiian themed party for our friends and their kids. I rented a bounce house, hoping it could act as a de facto babysitter while the adults chatted.  It arrived nice and early so our kids bounced while we prepped for the event, I strategy I may employ for future parties.

When we planned a Hawaiian party we didn't expect Hawaiian style rain. Our back garden was in full bloom (the joy of California in October), and we had planned for an outdoor party, but the heavens opened and the party moved inside. Only a few brave children braved the bouncer. Thanks to a lovely bouquet from my dear friend FollowthatDog, and some whimsical hibiscus flower party lights, the interior was blooming too, and we didn't let the rain dim the mood. Combined with the halloween decor of green gilded spiders, the flowers gave an interesting 'tropical but terrifying' theme. My friends Stan and Fachon bought real flower lei's., too There is something special about a lei. It brought me just a bit of that relaxed island feeling, even on a wet San Francisco afternoon. 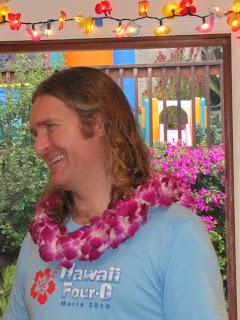 I had such a lovely day surround by friends and children. The Mai Tai's Geekydaddy created were deliciously authentic (did you know that Mai Tai was invented in Trader Vics in Oakland, just across the bay, in 1944, and is an almond syrup based drink? Neither did I until we did our research!) and  the catered food was both beautiful and delicious (Geekydog agreed, she snaffled a plate of pork sandwiches left a little to close to the edge of the table!).

I even got to sleep off the Mai Tai's the next day while Geekydaddy cleared up the debris.

I'll leave you with this photo. On Facebook I captioned it " Necklace; birthday gift from my parents, Lei; gift from Stan and Fachon, T shirt; $7.00 from Marshalls, Forty year old cleavage; priceless". Here's to another forty plus years! 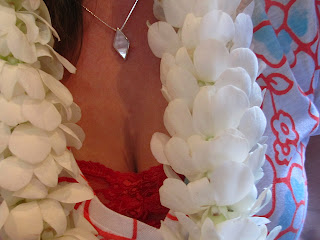