The journey is the destination

This is written across the front of one of my cross country ski shirts, and is meant to convey a message about that sport, but I feel it is a good slogan for parenting, or just life in general. I took up cross country skiing when I met Geekydaddy. The first winter that we were dating he paid my share of a ski lease cabin, something he and his friends did every year. He's always been a generous guy. At the time I was a post doctoral fellow with very little disposable income, and he figured if he wanted to see me at all I needed to come up to the cabin. I now know that he was very much hoping I would love the mountains and their associated sports as much as he did. It was a wise move on his part, this was the beginning of a long love affair, with the mountains and with each other.

Geekdaddy is an avid winter sportsman, he skis and snowboards like a pro, having spent most of his youth in Switzerland. We have a fantastic picture of him on the cabin wall,  taken when he was in his late teens, performing a jump from a peak in Verbiere on one of the very first snowboards. I love to downhill ski too,  though I am far less skilled, but I had never tried the cross country "nordic" type of skiing. I don't know many Brits who do. You may have seen it on the winter olympics, men and women in vivid lycra outfits flying along groomed trails with an arm and leg action just like those NordicTrak gym machines. By the end of that first winter I was hooked. The trails, winding peacefully between snow coated pines, reminded me of how I pictured Narnia, when Lucy first walks through the wardrobe into the land where it was 'always winter but never Christmas'. I loved the rhythm of the push and pole movement and the pounding of my heart in the cold air, the struggle to climb the peaks on the flimsy toothpick skis, and the thrill of careening down the hills, barely in control. That first winter I bought a second hand set of skis, boots and poles. Geekydaddy was a little concerned about this level of commitment, though I assured him it was to the sport, not necessarily to him!

Yesterday we got Geekygirl up on cross country skis for the first time. She has experienced the sport before, being towed in a pulk (rather like the sleds used by arctic explorers to pull their supplies across the tundra), but this year we felt she was ready to try under her own steam. The expedition started badly. Though bright, it was a cold day and occasional gusts of wind would whip ice crystals against our faces. The sensation was too much for Geekygirl, and she started to howl. This set her brother off, so I stood at the entrance to the trails holding two wailing children, my supply of tissues decimated after the first five minutes.

My holiday reading of "Raising Your Spirited Child" - a great book if you have such a creature in your life, reminded me that she likely was genuinely overwhelmed by the situation, so I kept my cool, empathized with her, and talked about the plans for the rest of the day while we waited for Geekydaddy to assemble the pulks. We bundled them in, still hysterical, watched by concerned fellow skiers, mainly young couples who were probably silently thinking "God, I'll never have kids". With a supply of blankets, tissues and stuffed animals cocooned into their pods, set off, hoping the motion and the scenery would soothe them (and us!).

It worked. I had forgotten how much I loved the sport, as I felt long unsused muscules stretch and strive, felt my lungs open deeply to capture oxygen in the refined mountain air. The snow was powdery and the pulks glided almost effortlessly, as we pulled our entranced passengers though the forest. They dozed, and we strode on. Before returning to the lodge to eat, we even got Geekygirl up on the little skis we had rented for her. Geekydaddy learned to ski at four, and from the day she was born he has looked forward to teaching his daughter. Things sometimes don't go well between Geekdaddy and his daughter. They frustrate each other, (they are too similar!), he finds her very hard to parent (which she can be), and I was crossing my fingers that this oh so important Father Daughter moment would go well. I left well alone and let him do it his way.

And she loved it. She let him support her, she listened to him, he was encouraging and patient and funny and she got the hang of it. Best of all, after lunch when we asked her if she wanted to ride or ski she said "I want to put my skis on again" and had another try. I noticed her lovely, inward smile of pride at her achievement. Then she was done,  she discarded the skis, and hopped back in the pulk. We did another few laps of the trails, side by side, towing a child each. I looked down at my trusty skis, remembering that first season and casting my mind back over the intervening years. I spoke my thoughts out loud to Geekydaddy.

"Remember when I bought these skis, and you thought I might be making too much of a commitment to you?!"

The journey is the destination. 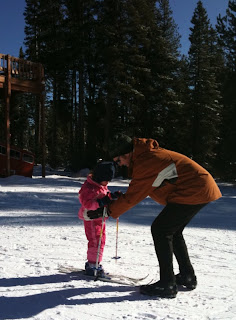 Posted by geekymummy at 2:06 PM

So sweet. I'm very proud of your big girl! (And I have that same book. Bought it when Ansel was going through some especially challenging phase or other, but never got around to reading it.)

I love that slogan -- makes you slow down and appreciate what you have now.

I have only cross country skied a few times -- but have been downhill skiing since I was 5. We took our three to Tahoe (!) last year and the two older ones loved it -- the 4-year-old didn't like it. I was so sad because I wanted her to have a good time.

Keep putting up yout Tahoe pics -- love to see them.

I know, I really want our kids to love skiing, but we can't force them! My dad wanted my brother to love planes, but he is a soccer guy. It worked out OK!