It's OK to be different 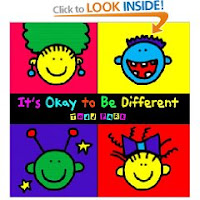 The geeky family are sad and disappointed that Californians voted on Tuesday to ban gay marriage again. Yesterday I happened to be reading a sweet bedtime story, a book by Berkeley author Todd Parr called "it's OK to be different". I wish every child and parent in California had this book. No, its not about princes marrying other princes, it isn't controversial in any way, though its message is about accepting yourself and accepting diversity. It just tells kids, with colorful illustrations, that "its OK to wear glasses", "Its OK to have a wheelchair", "It's OK to have a big nose". The final page states "Its OK to be different. You are special and important just for being who you are".

On Tuesday, California voters told a group of people that they were not important, just because of being who they were.

For readers not up to date with the history of gay marriage in California, here is a brief summary of how we got to here. Marriage in the US, like in many countries, is a civil contract in which your chosen partner becomes your legal next of kin, and thus grants certain important rights. The right to visit your partner in hospital and to make medical decisions for each other, to inherit, and to be covered under a partners health insurance policy are assured by marriage. Religious marriage is a separate thing. Wherever you marry in a church, synagogue, or mosque; by lake tahoe, in a casino, or while skydiving, you must first obtain your marriage license from your county clerk's office. In 2000, voters approved an amendment to the state constitution that defined marriage as between one man and one woman. In February 2004 the brave, decidedly heterosexual, and really quite cute Mayor of San Francisco decided that this was discriminatory, and allowed the SF county clerk's office to grant marriage licenses to gay couples. This lasted a few months, and 4000 marriages, until it was ruled to be against the state constitution. In May 2008, a case addressing the rights of a gay couple to marry was brought to the supreme court of California, and the justices decided that to deny these civil marriage rights to a group of people base on sexual orientation was discriminatory. This ruling allowed county clerk's offices across the state to issue marriage licenses to same sex couples. Since May, more than 18,000 gay couples have been legally married in California.

In reaction to this, opponents of same sex marriage pushed a proposition on to the ballot this November (In California legislation as well as candidates for office can be put up to a vote), to amend the state consitution to define marriage as being between a man and a woman, thus reversing the right of same sex couples to marry. This legislation passed, by a narrow margin.

Don't believe in gay marriage? Well don't get one.

Gay marriage 'threatens traditional marriage?'. Of those 18,000 gay married couples (or are they married? Their status is in limbo now), I doubt many of them woke up that May morning in a traditional marriage, and said to their opposite sex husband or wife "You know honey, now that gay marriage is legal, I'm going to leave you and marry my buddy, Joe/best mate Susan".

If the only reason you chose' traditional marriage' over' gay marriage' was that the latter is not legalized, well you've got problems that legislation can't solve!

What opponents of gay marriage don't seem to realise is that gay people get married, they always have, they get married in their churches and by their Rabbis, or in front of their friends and familes. What the court ruling did was to finally allow these marriages, which have always existed, to be recognized by law in the same way that heterosexual partnerships are.

I suspect that much of the opposition comes from two basic misconceptions :

One, that someone can choose to be gay. That it is a lifestyle choice, something kids do to annoy their parents like getting tattoos or riding motorbikes. That if our kids see gay couples just as accepted as straight couples they are going to choose to become gay. This makes no sense. Did you choose your sexual orientation? Or is it just a fundamental part of who you are? And if our kids are gay, (and some of them are), don't we want them to grow up in a world where they see happy gay couples in accepted relationships? Where they may still feel different, but at least not alone?

Two, that being gay is a moral failing. This one is harder to address, some religions prohibit homosexual behavior, and many Americans have strong religious beliefs. But religions evolve as understanding of human nature evolves. It used to be a sin in Christianity to lend money at interest, and just fine to enslave people. Many people reconcile their homosexuality with their religion, many religious leaders are themselves gay. And besides, religion and state are separated in this country.

Proposition 8 wasn't about religion, or the nature of homosexuality. Though the advertisments in favour of it must have convinced people that it was. It was simply about keeping a civil right for one group of people, and taking it away from another.

The silver lining in this cloud is that at least this time the legislation passed by a much narrower margin than in 2000. Lets hope it doesn't take another eight years for Californians to recognize that its OK to have a different kind of marriage, and that we are all special and important, and entitled to equal rights under the law.
Posted by geekymummy at 10:29 AM

Someday, hopefully soon, we'll have equality for all.

It seems funny to me that the same people who most want to keep the government out of our lived are the ones who most want to use government to restrict the rights of people they consider "different." Gay marriage is actually an affirmation of the value of marriage, not a threat to it. Those people who seek to maintain an out-dated definition of marriage are actually making marriage less and less relevant to our contemporary world.

I agree with Matt, it is a affirmation not a threat. So disappointing when the general population can't accept that everyone is different and we are all entitled to choose! Jen